On Sunday, June 16th, a Blue Scarves protest was held in front of the Monument to Peace near the Tower Eiffel.
This was a symbolic location to protest against the decision by the evil triangle ABE/NIKAI/HAMADA to commit the Japanese government to re-start commercial whale killing in Japanese waters.
The following three LDP politicians are elected by the following whaling electoral districts:
SHINZO ABE in Yamaguchi
TOSHIHIRO NIKAI in Wakayama
YASUKAZU HAMADA in Chiba
One poster accused them of betraying their country and their co-citizens and give priority to their selfish political interests.
Another poster accused them to poison school children by distributing “free” whale meat ( in fact paid by taxpayers money) with concentrations of mercury and PCBs much higher than the maximum recommended by the Ministry of Health.
Several posters accused them of murder and genocide of non-human persons. These posters reflect the position of the AAAS.
The American Association for the Advancement of Science, which is the largest scientific organization in the world, held a symposium during their 2012 annual meeting titled: “Declaration of Rights of Cetaceans. Ethical and Policy Implications of Intelligence”.
One of their conclusion was that “cetaceans are “non-human persons, “ should be seen as “beyond use” by humans and have “moral standing” as individuals. It is, therefore, ethically indefensible to kill, injure or keep these beings captive for human purposes.

On May 26, Alexandra tried to organize a protest in front of the Japanese embassy in Lisbon, which was immediately interrupted by the Portuguese police.
So we went to a nearby park and held it the protest there.
The AWC is focusing its protests on the ethical argument that some cetacean species have brains more complex than human brains, in particular in terms of the total number of neurons in their neocortexes, and of many other characteristics of high-level awareness.
Until scientists have an answer to these issues, they must be considered some kind of People of the Ocean, and killing them must be considered murder.
This is why our Blue Scarves protests have been simulating locking in effigy their Prime Minister Shinzo Abe in a pillory of public shame for the genocide of cetaceans.
Our analysis is that the restart of commercial whaling is clearly the responsibility of the two top people in the ruling LDP (Liberal Democratic Party)  as they control the whaling commission in the Diet:
Shinzo Abe, Prime Minister and LDP  leader, elected by the whaling electoral of Shimonoseki from which the Antarctic whaling fleet has sailed for the past 30 years.
Toshiro Nikai, secretary general of the party, elected by the whaling electoral district of Wakayama.
Our intent is to increase in Japan the awareness that these two people are creating enormous damage to the international reputation of Japan just to selfishly defend their narrow electoral interests. Hopefully among their political opponents. 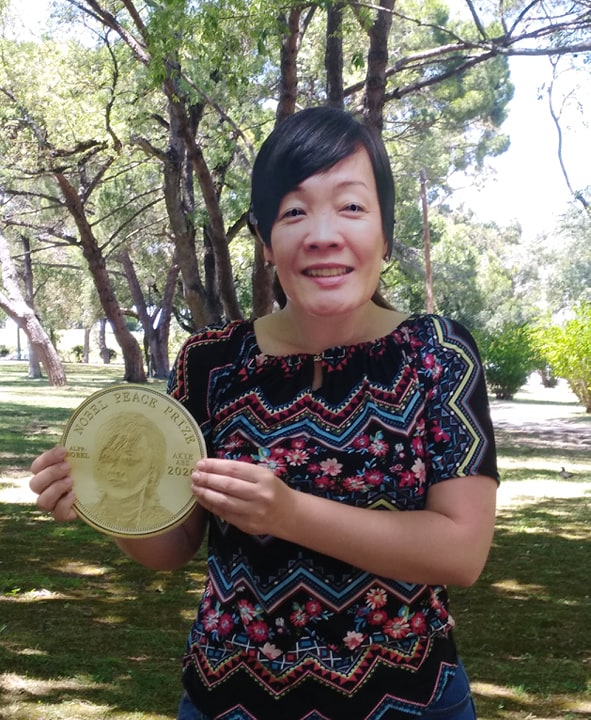 Alexandra tried another theme in Lisbon: to simulate the nominating of Shinzo Abe’s wife  Akie Abe for a Nobel Peace Prize if Akie could convince her husband that his decision is a shame to the family. Affectionately known as Akki by the Japanese, Abie has been nicknamed “the opposition party in the house” because she has made public comments against some of Shinzo’s policies ( although not about whaling to our knowledge?)
AWS believes that all the anti-whaling efforts by western NGOs has essentially zero impact unless it somehow influences the minds of influential people in Japan.
The only exception we know is the recent initiative by an NGO to sue the whaling association in Taiji as breaching the anti-animal cruelty laws in Japan.

On Wednesday 15th of May, a protest was held by the brothers John Atkinson y Ross  Atkinson in front of the consulate of Japan in Toronto, Canada. Shinzō Abe was put in a pillory for the killing of so many innocent whales, but from his smile, he does not appeared very perturbed as yet. A variety of scientific studies have found that whales and dolphins are capable of advanced cognitive abilities such as problem-solving, artificial “language” comprehension, and complex social behavior, indicating that these cetaceans are far more intellectually and emotionally sophisticated than previously thought. Killing them in murder!

On Sunday 24th of March, a small group of people wearing blue scarves organized a quick protest in front of the Japanese embassy in Madrid for less than $100. Blue Scarves hopefully will become an unincorporated ” viral meme” of small groups of people around the world organizing protests against whaling in front of the whaling countries’ embassies on the last Sunday of each month, culminating July 26 during the Summer Olympics in Tokyo. Blue Scarves goal is to spread the scientific conclusions of the AAAS (American Association for the Advancement of Science, the largest scientific organization on the world with 120,000 members) : “Cetaceans are “non-human” persons, should be seen as beyond use by humans, and have moral standing as individuals.” This makes killing cetaceans murder, and exterminating their families genocide. Blue Scarves is a peaceful movement, which locks in a pillory an effigy of the heads of whaling states and other guilty individuals while detailing on posters precise scientific evidence.