Notice: Trying to access array offset on value of type bool in /home/customer/www/antiwhalingsociety.com/public_html/wp-content/themes/bridge/includes/shortcodes/shortcode-elements/slider.php on line 21 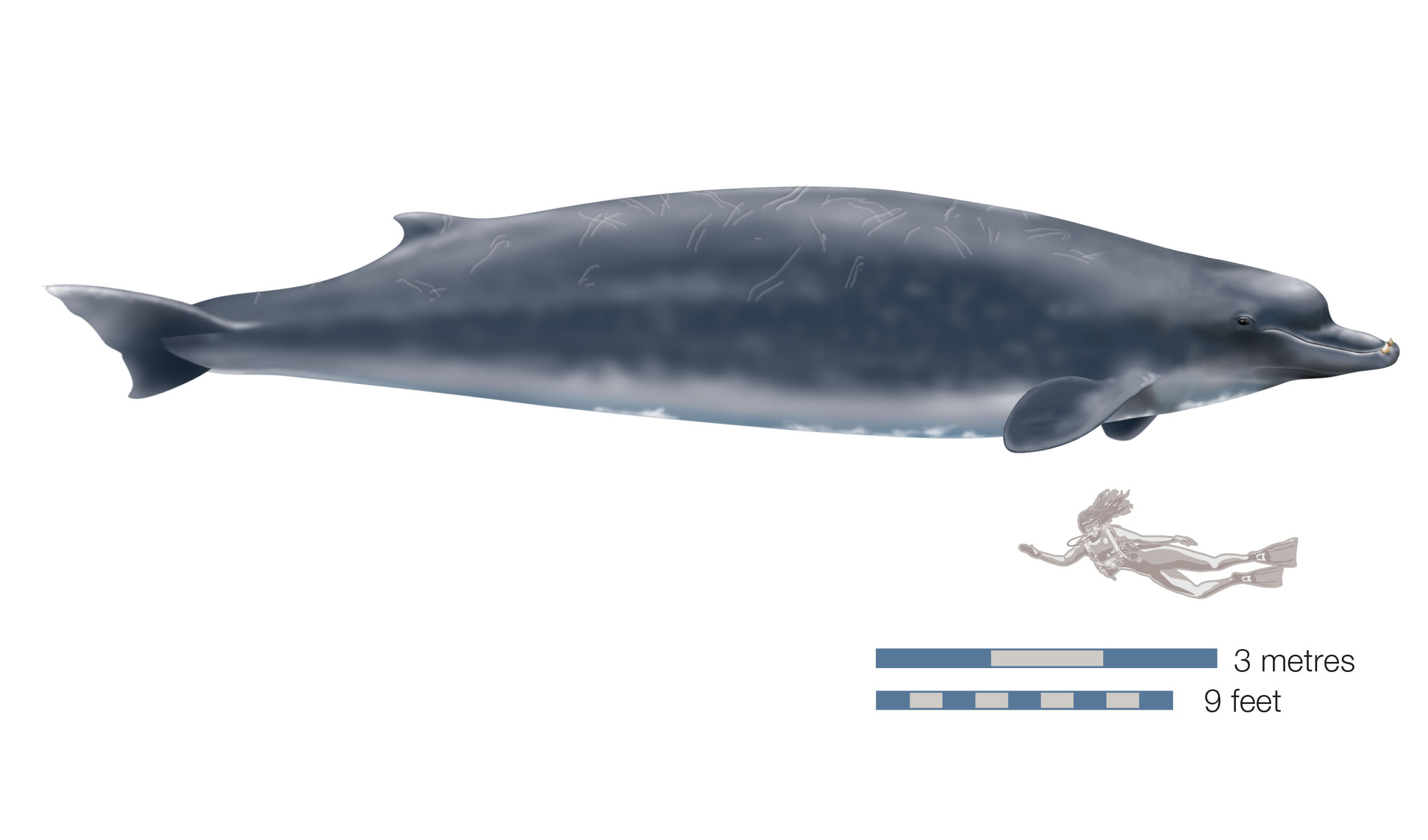 There are around 21 species of medium-sized toothed whales in this family. Ziphiids are found in all the world’s oceans. They have long, slender beaks; small dorsal fins; and short, rounded or pointed flippers.

They have grooves on their throats and are brown or gray. Ziphiids eat fish and squid and are rarely found in shallow water.

Beaked whales are one of the most diverse groups of marine mammals, comprising 21 (24%) of the 87 extant cetacean species currently recognized by the Society for Marine Mammalogy. Among all marine mammal taxa, only the dolphin family (Delphinidae) is more speciose. Yet, the ecology and conservation status of ziphiids are the least understood for all marine mammal groups, owing to their deep-water oceanic existence and typically inconspicuous surface behavior. Feeding in depths often exceeding 1000 m, most species are rarely seen; some have never been identified alive at sea and are known only from beach-stranded carcasses.

According to the IUCN Red List, approximately 40% of marine mammal species are considered Data Deficient, whereas, for the Ziphiidae, 90% are Data Deficient (all except Cuvier’s beaked whale, Ziphius cavirostris, and southern bottlenose whale, Hyperoodon planifrons, which are Least Concern). Population trends for all beaked whale species are listed as unknown on the IUCN Red List.

Baird’s beaked whales are deep-diving cetaceans which belong to a group called the ‘beaked whales’, named for their elongated beaks. These whales are among the least studied and most mysterious of all cetacean families.

As the name suggests, they have a very long prominent beak, even by beaked whale standards. The lower jaw is longer than the upper and the front teeth are visible even when the mouth is fully closed, forming so called ‘battle teeth’. Their upperparts are dark brown, with a lighter mottled underside of unevenly spread white patches. They have a small dorsal fin located two thirds down the body, a blowhole that is crescent shaped, and a forehead with a melon-like shape, from where its slender beak projects.

Baird’s beaked whale is found in the east from the southern part of the Gulf of California, to the Bering, Japanese and Okhotsk Seas in the west and in the temperate North Pacific. They prefer deep ocean waters of 1,000 – 3,000 meters, where most of their prey can be found.

Baird’s beaked whales travel in breeding groups numbering 6-30 members. These groups are led by a large male whale. The scars on these leaders’ beaks and backs indicate aggression and rivalry for such a position.

They usually come to the water’s surface 3-4 times at intervals of 10 -20 seconds before making a deep dive for at least 20 minutes. They can stay underwater for more than an hour. Their blow is difficult to see, being low and bushy. When a whale blows, its melon and beak tends to project just above the surface of the water. They are quite elusive and keep out of the way of ships, though sometimes they bask at the surface, unless startled.

The Japanese fishing industry is responsible for around 70 whale deaths annually for their meat. Noise and chemical pollution are further threats, as well as climate change, as it is predicted to change the marine environment.

According to Wikipedia, estimates for Baird’s are of the order of 30,000 individuals. According to the IUCN Red List, there are 1,100 Baird’s beaked whales in the eastern North Pacific, and about 7,000 individuals in Japanese waters (5,029 off the Pacific coast, 1,260 in the eastern Sea of Japan, and 660 for the southern Okhotsk Sea). Currently Baird’s beaked whales are classified as Data Deficient (DD) on the list of threatened species.

They measure between 2 and 9 meters long, with fusiform body and large head, elongated snout and only a blowhole on the top of the head (breathing hole that many marine animals have as contact of air or water with their internal respiratory system). They are strict carnivores.

They are among the most intelligent species that inhabit the planet. They are relatively close to the coasts and often interact with the human being.

The pilot whale has a distinct rounded head with a very slight beak and an up-curved mouthline. In males the rounded head may protrude up to 4 inches over the lower jaw. Its body is long and stocky, narrowing along the caudal peduncle (tailstock).

Displaying intelligence equal to that of the bottlenose dolphin, the pilot whale is easily trained. One captive pilot whale named Morgan was trained by Navy scientists to retrieve beeper-attached objects from the ocean floor at depths of over 1,600 feet. Carrying a clamping recovery device in his mouth, he attached it to the located object, which was then raised to the surface by compressed air balloons. The pilot whale is extremely social, and is well known for stranding in groups of a few animals to several hundred at a time.

The global population of long finned whales is divided into two parts, with the first and smaller one inhabiting the circumpolar band in the Southern Ocean between the altitudes of 20° S and 65° S. Sightings have been reported off the coasts of countries like Argentina, Chile, South Africa, New Zealand and Australia. The much larger second population is distributed in the North Atlantic Ocean, with their range extending from the waters of South Carolina in US across to Morocco and Azores in south and the waters of Newfoundland to Iceland, Greenland and northern regions of Norway in north. They are also found in the western Mediterranean Sea.

The short finned whales prefer warm tropical and sub-tropical waters with populations living around the outer boundaries of continental shelves. But, individuals have been reported to move towards the coastal areas, sometimes, far enough onshore to become stranded.

Its population overlaps slightly with the long-finned pilot whale in the temperate waters of the North Atlantic and Southern Oceans. About 150,000 individuals are found in the eastern tropical Pacific Ocean. More than 30,000 animals are estimated in the western Pacific, off the coast of Japan. 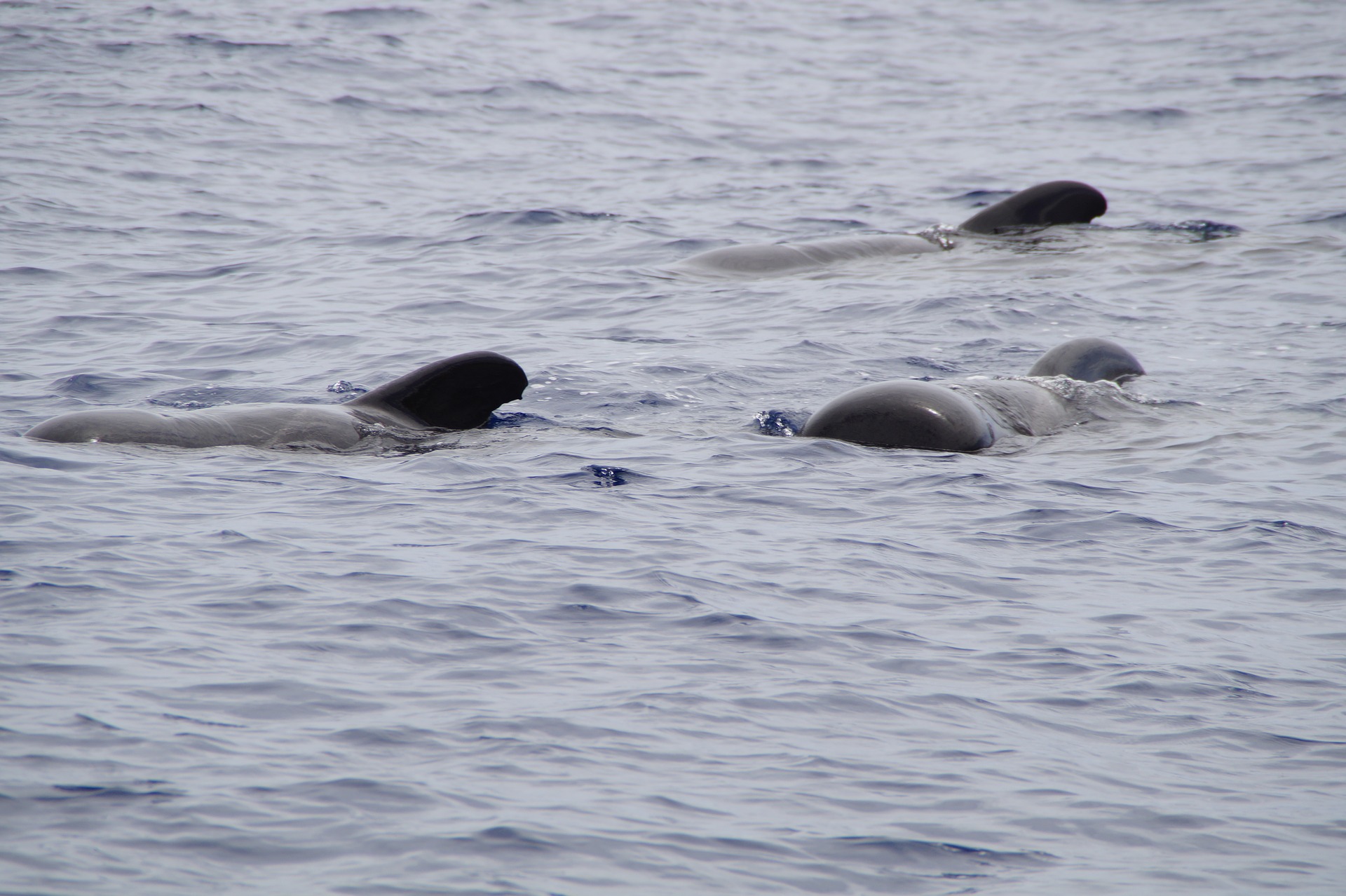 Both species are listed in the IUCN Red List of Threatened Species as “Data Deficient”. The Convention on the Conservation of Migratory Species of Wild Animals or CMS listed the long finned populations from the North Sea and Baltic Sea in Appendix II. The short finned species is listed on the CITES Appendix II. The animals are protected by law in certain countries to save them from extinction. But, whalers in various countries continue to hunt them due to their unclear conservation status.

Risso’s dolphins, also known as Grampus, are one of the larger members of the dolphin family. They are usually an offshore dolphin whose inshore appearance is uncommon. In numerous instances though, groups have moved into inshore areas where they have been seen repeatedly over a fixed period of time. Despite this, they are seen with some regularity in Monterey Bay, California, and off British Columbia. They have distinctive body markings and they have only 7 or fewer pairs of teeth in the front of the lower jaw, and typically none in the upper jaw.

Risso’s dolphins have a cosmopolitan distribution, meaning they can be found worldwide in temperate, subtropical, and tropical oceans and seas from latitudes 64° north to 46° south. Their preferred habitats appear to be mid-temperate waters of the continental shelf and slope between 30° and 45° latitude. They prefer deeper waters (3,300 feet) with steep bottom topography, but they are known to inhabit shallower coastal areas.

In the Northern Hemisphere, their range includes the Gulf of Alaska, Gulf of Mexico, Newfoundland, Azores, Norway, Japan, Russia, and Red Sea. They are known to inhabit the Mediterranean Sea but are rare in the Black Sea. They do not appear to inhabit the Persian Gulf and some other very shallow, enclosed bodies of water. In the Southern Hemisphere, their range includes Argentina, Australia, Chile, South Africa, and New Zealand.

While formerly thought to be rare, this impression probably resulted from the typically offshore distribution. In fact, the species is probably abundant throughout its range, although no exact numbers are known. 13,000 – 30,000 animals are estimated to occur off of central and northern California. In a few parts of the world, Risso’s dolphins are killed for human consumption; until recently, they were commonly found in the open market in Taiwan, and they are part of Japanese drive fisheries for dolphins. In Sri Lanka, they are one of the primary species taken in a gill net and harpoon fishery that may have grown out of selling accidentally netted dolphins. In most areas of the world, however, they are not currently under major threat from direct killing, but may be susceptible to accidental fishing gear entanglement and pollution from coastal development.